Probation instead of Prison

Probation instead of prison is a sentencing option for some Defendants convicted of crimes in Kansas. Most probation sentences are ordered because the convicted person is entitled to it as a matter of law while other, more borderline cases, can only get it by motioning the court to making a finding that the Defendant is eligible.

In order to determine whether a person is eligible for a non-prison sentence there are two things that must first be known: the Defendant's criminal history score (number and nature of prior convictions) and the level of the current crime charged.

To illustrate this point, you must see the following Kansas Sentencing Guidelines Grid. This grid has ten rows or "severity levels" and is used for non-drug crimes. This discussion is limited to felony crimes only and does not apply to misdemeanor crimes. Non-grid crimes are not part of this illustration. 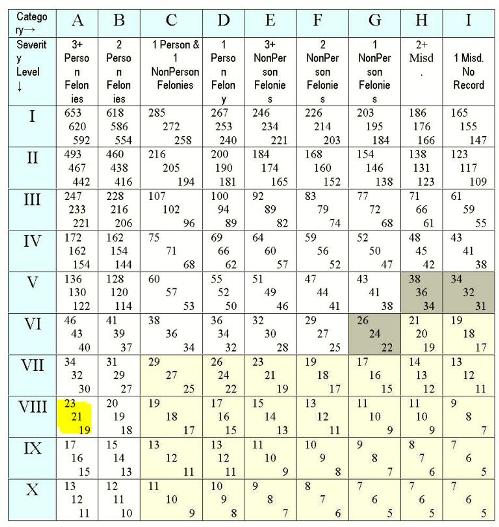 As a hypothetical example, let's assume that Joe Blow takes a check from your check book, makes it out to himself, signs your name and cashes it at the grocery store. Joe Blow gets charged with the crime of Forgery in violation of KSA 21-3710, which is a severity level 8 non-person felony.

If convicted, the defendant will be sentenced to a prison term that falls in the box where the severity level of the crime intersects with the Defendant's criminal history score. So, if Joe Blow has never been in trouble before than his criminal history score is I and he will be sentenced to a prison term ranging from 7-8-9 months. However, because the intersection of I and 8 fall within a light yellow shaded box, Joe Blow is entitled to probation as a matter of law. Joe Blow will only serve his back up time if he becomes non-compliant.

This is the basic framework. However, in order to know Joe Blow's final disposition, you must know if there are any special sentencing rules that apply above and beyond the sentencing grid above. There are special sentencing rules that apply to the crime of forgery but that is another legal topic. Let's assume for the purposes of this hypothetical that Joe Blow is getting a non-prison option with an underlying standard prison sentence of 8 months.

If Joe Blow remains compliant with the terms of his probation, he can  have his case closed at the end of the term. If Joe Blow is non-compliant, then the court has several tools available to punish Joe Blow up to and including ordering him to serve his underlying prison term of 8 months.

The very first rule of Probation is Keep Your Probation Officer happy because if you don't, you won't be happy. If you are lucky enough to get a probation opportunity, it's very important to stay in touch with your probation officer, keep all appointments, drop clean UA's, attend required educational or rehab programs, do your community service hours, pay your fines and most important of all, do not get any new charges. If something happens and you are having trouble, communicate with them. They actually want you to succeed and have many resources available to help you.

In order for Joe Blow to remain in compliance he will need to complete all of the requirements listed in his Journal Entry of Judgment. This is a form that the judge and the attorneys sign at the end of the sentencing hearing. Each Journal Entry will be different for each case.

However, some of the basic and common requirements might be to attend educational classes, pay fines, do community service hours, not associate or make contact with either the victim of the crime or known criminals, make restitution to the victim of the crime, pay court costs, pay a KBI database fee, visit the probation office on schedule, take random drug tests and not pick up any new criminal charges. 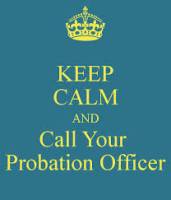 If the officer assigned to supervise Joe believes that he is not in compliance then a motion will be filed with the criminal clerk's office stating all the reasons the officer believes that Joe is not in compliance  and that motion will be set for a hearing before the sentencing judge. A Notice of Hearing will be sent to the Defendant along with the Motion to Revoke Probation which contains the allegations of non-compliance. The Defendant has the right to be represented by an attorney at this hearing. An attorney from the District Attorney's office will appear to prosecute the motion before the court.

Up until recently, the probation office could file a motion to revoke a Defendant based on allegations of non-compliance and the sentencing judge could order him to serve his underlying prison term.

The probation office still maintains this same power, but a graduated system of punishment leading up to revocation is now in place with the enactment of Kansas House Bill 2170 which went into effect July 1, 2013.

Any jail term or "shock time" imposed at sentencing is considered a sentencing provision and does not count against the 18-day cap for the intermediate sanction.

After an intermediate sanction, or "quick dip" sanction has been imposed, the probation office can file a motion for a Tier Two sanction for second or subsequent felony probation violations. This motion will be set for a hearing before the sentencing judge and the Defendant has a right to have an attorney represent him at the hearing. If the court makes a finding that the allegations in the motion are true, then the court may impose a 120-day sanction or a 180-day sanction, up to one time each, for each subsequent violation. These sanctions cannot be imposed at the same time or "stacked" to create a 300-day sanction.

If the court has imposed all of the graduated sanctions and the Defendant continues to remain non-compliant then the court must revoke and order the Defendant to serve the underlying prison sentence. 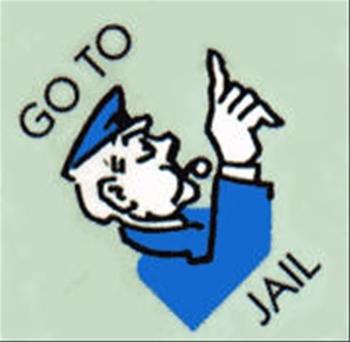 The court may revoke without using the graduated system of sanctions if the Defendant commits a crime or absconds from supervision. The court services officer or community corrections officer will motion the court for revocation based on the one of these factors and a hearing will be held before the sentencing judge. The Defendant has the right to be represented by an attorney at the revocation hearing.

The court may also bypass the graduated sanction progression and revoke the violator's probation at any time if the court sets forth with particularity the reasons for finding that public safety will be jeopardized or the welfare of the offender will not be served by another sanction.

Transfer of Probation outside Kansas

One of the most frequently asked questions I've gotten over the years is, "Can I transfer my probation to another state?"

If you become non-compliant with the terms of your probation in the new state, it will be reported to the probation office in Kansas and you will get a Notice of Hearing to address the issues of your non-compliance. Should you fail to appear at the court hearing stated in the Notice of Hearing a warrant will be issued for your arrest. You should contact a Kansas attorney immediately if you miss court. Should you fail to do so you could be arrested and extradited back to Kansas on the probation warrant.

There is more comprehensive information available about the most recent changes to the new Kansas probation laws.